Many commentators have noted the rise of messaging applications such as Facebook messenger, Google hangouts, WhatsApp and the granddaddy of them all, Skype – and predicted the demise of SMS.  This graph, from Irish regulator COMREG’s Q4 2014 market report, shows it clearly.  However, the last two quarters show the decline slowing and even reversing.  Future reports will show whether Q4 2014 is a blip or the steep decline of SMS is over. 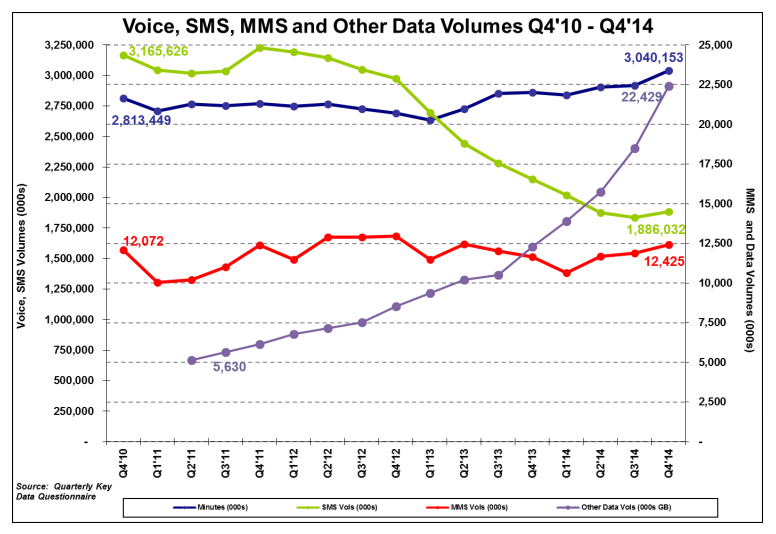 However, most of us still use SMS every day.

It seems that SMS is here to stay.  Why is this?  Well, SMS offers some unique advantages:

These are among the reasons why SMS has a bright future. Sure, usage will continue to decline for a while as messaging apps gain penetration – but SMS is here to stay.

The telcos and the blow-in giants of the internet (Facebook, Apple and Google) are shaping up for a battle royal, and whatever the outcome, the world of telecoms will change for good.  Will we soon see the end of the telco as we know it?

Right now, the giants of the internet already have control of most of the devices that we use for our mobile communications.   They are building a portfolio of internet-based communications services (Google Voice, Apple Facetime…) – or buying them (Whatsapp).  These ‘over the top’ services are eating into telcos’ revenues, but the telcos retain control of their key assets – the phone number and the cellular network. The giants of the internet are active at the other end of the seven-layer model too – investing in infrastructure like subsea fibre-optic cables.  Moreover, Google has launched ‘Google Fiber‘, providing broadband service to homes in the USA – initially to Kansas City, and now rolling out to another 34 other cities in the USA. Interestingly the basic connectivity service is free – you just pay the $300 or so installation cost.  Imagine a fixed line telco in Ireland offering that!

But wait, there’s more. Yesterday (24th April) it was reported that Google are considering offering free wi-fi in those same cities.  It is already (just about) possible to port your US  landline number to Google Voice – so with an Android smartphone, a VoIP app and a landline number you can have cordless (though not truly cellular) coverage over public wi-fi.  Calls might even be free of charge.

The easy way into full mobile service is by becoming a mobile virtual network operator, or MVNO.  Google is reported to have been in MVNO talks with US mobile operators Verizon and Sprint.  It is of course only a matter of time before a mobile operator breaks ranks and does a deal with Google.  Like Diarmait Mac Murchada’s pledge of allegiance to Henry II of England in exchange for support in his attempt to regain the Kingship of Leinster, such a deal is likely to be the thin end of the wedge. Already we see the integration of a SMS interface into Google Hangouts – encouraging the customer to to choose the more feature-rich and lower cost Hangout IM instead of sending an SMS.  Will we see the same with voice calls over wifi?  While the Irish MVNOs are owned by the likes of Tescos, the MNOs will sleep soundly.  But Google as an MVNO?  Be afraid, mobile operators.

It used to be said that the telecoms industry had succeeded by sacrificing functionality for ubiquity – if the computer industry had invented the telephone, we would have all had colour videophones 30 years ago… but most of them would be unable to communicate with each other.  The telecoms industry, however has achieved something very special – any phone number in the world owned by any phone company using any technology can be called from any other phone on the planet. What a great and unique achievement!  However, if an intelligent terminal can handle a multiplicity of standards, perhaps this lack of functionality has become the Achilles’ heel of the telcos?

Of course, there are many things that telcos do well that the internet companies can’t – like providing (almost) nationwide connectivity.  However, their business is being eaten into by the Internet behemoths.  The end of the telco as we know it is, if not nigh, then at least a likely scenario in the long term, perhaps even in Ireland.  Interesting times ahead. ARCEP, the French telecoms regulator,has decided that it wants to regulate Skype as a telco.  See the link here and scroll down to the press release of 15th March.

Which definition is in the best interests of Sean citizen?  It seems to me that if MVNOs are regulated, then OTT players should be as well.

SMS traffic volumes in France have slumped in the third quarter of 2012, according to this news report.

Will this happen in Ireland anytime soon? Personally I can’t see it. In the longer term, yes, sure – but just not yet – the penetration of OTT services isn’t great enough – yet. But when it does come, it’ll be irreversible.